I will be attending next year's 2016 International Left Hand Path Consortium. A gathering of followers and practitioners of various LHP traditions, I'll be showing mask works and possibly some paintings. All of the mask works on display will be for sale as well. I guess this seems like a nice time to say the Lords of The Left Hand Path series will getting it's first new release in some time next month. on April 11..look that date up for a clue. Check out their site Here.

In other news, the first release between Death Rays Clothing, Geoff Kresge and Screwbiter Studios is now available in the shop! the PsychoBat is live and up for grabs so head on over and pick one of these guys up: 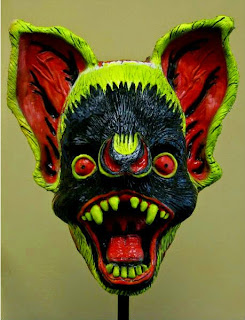 Based on the T-Shirt's design and conjuring the spirit of the old plastic Ben Cooper Halloween masks from the 70s, this guy has been finished with neon and glow in the dark paints! Also available in a more realistic vampire bat finish. Go get one!
Posted by christopher lee at 9:48 AM No comments:

back from the dead blog world

Been a few centuries since the last post here. I'm shooting to have a better outreach on this thing this year. There are several new projects already unleashed and coming soon on the site. At the end of 2014, the first in a series of masks inspired and based on the writings of HP Lovecraft was released in the form of Cthulhu! He is based *heavily* on the original 1934 sketch that HPL did of the Elder God. I did take small bits of artistic license by adding certain sea creatures elements into him, but I've stayed as close to HPL's original design as possible. He is listed in the shop currently, but I've still got to get around to adding new pics of a couple paint variations available. More coming soon among them is Nyarlathotep, Shub Niggurath and a mask of HPL himself! Also working on a couple of collaborative efforts recently as well, the first between a Yokohama Japan's Mas!Store in the form of a Halloween mask of one their shirt designs. No progress pic to throw out there at this moment, but I'll be posting something up soon. The other is another mask based on a shirt design, this time between Death Rays Clothing, Geoff Kresge (ex Tiger Army, AFI, etc) and Screwbiter. This first mask is the PsychoBat and slated to be one of a few releases in conjunction with the two of them. Here is a photo of the final clay sculpt which is being molded and prototype casting this week: 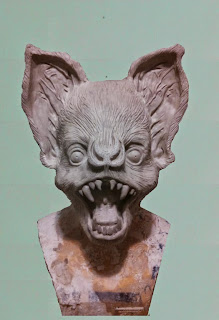 He'll be an open ended edition price TBA and available in two color schemes but more on that as everything is finalized! And last, the Thrall mask has been re-released for all of you who have asked over the years! Like last time, he glows in the dark and is available in half or full head versions. This one will also feature a blood spatter paint finish upon request, so go get one before this one is gone! That's about it for now, more to follow!
Posted by christopher lee at 9:07 AM No comments: