Just had a meeting this week with a director in Asheville for the special fx makeup job on an upcoming horror film. The meeting went well, and I've landed the gig! Been spending the last day or two reading the script and coming up with ideas. I can't really say too much right now as it's pretty hush hush, but I will be posting updates soon enough. Speaking of film, I've got roughly one minute of footage for a silent short I'm working on completed. It's a silent, live/stop motion piece so I'm doing this one frame at a time. It's an incredibly time consuming process, so I'm excited to have just one minute!


Up next is the next mask release! The official Radio Free Satan Clint Mephisto Halloween Mask.  Still not sure what the production run will be or cost, but I can say this: It will be cast in the style of 1950's and 1960's era Halloween masks and is the first in a series of masks bearing that style. Another piece in that series will have a "guest" designer but more on that later. Here's a teaser pic of Clint: 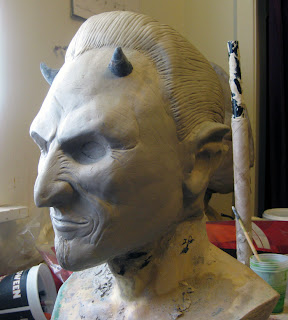 I've also recently completed the sculpture for a 3 ft Eddie mummy for an Iron Maiden cover band in Las Vegas. They will be using it for their live show and it will house a fog machine in it's mouth. Here's a look at him: 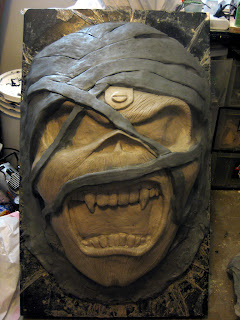 I'll be reworking and refining the site in the coming weeks as well, time permitting. I've also taken over duties on the website for the Millennium Wrestling Federation, overhauling it and giving it a much needed new look. Check it out, http://www.mwf-live.com.  While we're talking wrestling, I will be performing tomorrow night with the MWF at the second of four annual "Super Shows" where my alter ego will be defending the MWF Championship. If you are in the Lincolnton, NC area hit the site up for directions and come on out!

end of line.
Posted by christopher lee at 6:32 PM No comments: